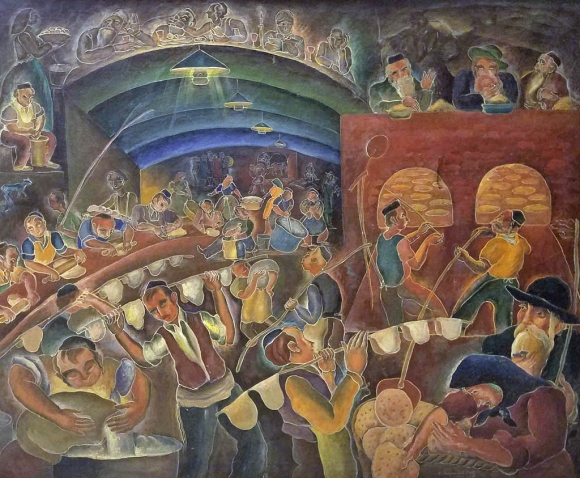 In his painting, Katz shows various steps of the matzah making process. We see dough being kneaded, rolled into circles, carried to ovens on long sticks with the rounded ends hanging down, and placed in the ovens. A man at right, perhaps the mashgiah (supervisor authorized to ensure adherence to Orthodox Jewish ritual food preparation), holds a rectangular box which could be a snuff container (used to hold powdered tobacco which is inhaled rather than smoked).

Automation of matzah production, which began in the mid 19th century, included machines that kneaded the dough, rolled, stretched, perforated and cut it, and, by the early 20th century, a conveyer belt that took the dough between machines. One firm, Manischewitz, produced square matzah as early as 1912. Either Katz depicted contemporary preparation of handmade matzah, or perhaps this is a memory of the production of handmade matzah in his hometon of Kassa in Hungary.

A family celebrating the Passover Seder, and three men in apparent disputation occupy the upper left and right sections of the painting, framing the artist’s scene of the production of matzah used for the Seder. 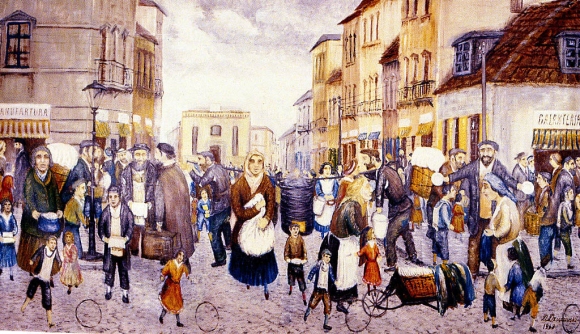 The second painting we will consider depicts another prelude to the Seder. The artist, David Dzienciarski, depicted a street in the Jewish section of the Lodz of his childhood filled with shoppers preparing for Passover. Two men carry a cask of boiling water on a pole. The water will be used to kasher (make kosher) utensils and dishes for Passover. A rag seller at the right offers new plates for old clothes. While shoppers carry sacks or baskets containing their purchases, three children roll hoops, uninvolved in the preparations of their elders. 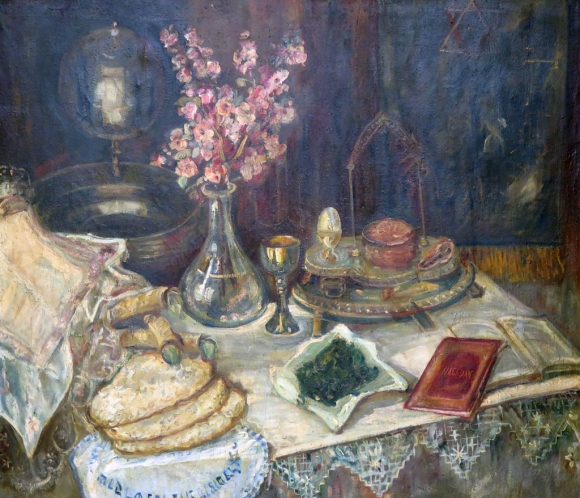 The third painting is a Passover still life by Mathilde Hahn Meyer, wife of Rabbi Dr. Seligmann Meyer (1853-1925), Rabbi of Regensburg from 1881 to 1925. She created a group of still life paintings celebrating the Jewish holidays. Perhaps motivated by her preparations for the Passover Seder, the artist set a small table with a Seder plate containing ceremonial foods, a silver cup, three round matzahs sitting on a matzah cover embroidered in blue, two Passover Haggadahs (one open and one closed), a candle holder, a laver for ritual handwashing, and a vase of flowers. A pillow sits at the left, waiting to be placed on a chair so that the sitter may recline in comfort during the Seder. The table is obviously too small – too tightly packed – to be the actual table around which her family would have sat for the Seder. 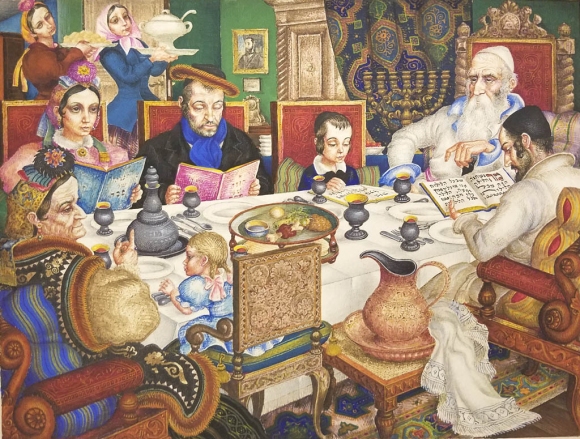 Our final painting is Arthur Szyk’s Passover Seder scene. A family is gathered around the Seder table. The women wear luxurious, colorful garments. Two of the men wear a white kittel; the third a black kapote and a fur-trimmed shtreimel.

The man in the right foreground holds a Passover Haggadah open to the Four Questions.
Szyk’s style with its minute reproduction of details and jewel-like colors is reminiscent of that of medieval manuscripts. The image offers its viewer a trip through time to the Poland of Szyk's past, a high watermark of culture, stability, family life, and religious strength. The work appeals to the Jewish viewer's sense of tradition and family values. It would have been viewed with nostalgia and bittersweet overtones by viewers still staggering from the horror of the Holocaust, which had forever swept away all traces of the Polish shtetl.

Despite its apparent realism, this image represents the artist's private fantasy. The women’s garments are the product of his imagination. And, while Szyk appears to depict a specific moment of the Passover Seder, he combined two sections of the Passover Seder that do not occur at the same time: the meal borne into the room by women in the background holding a tureen and a laden plate, and the recitation of the Four Questions.