Hanukkah tops, also called dreidel or sevivon, turn up in a number of different forms and from many countries in Yeshiva University Museum’s collection – including actual tops as well as images of tops in books and cards. Here are just a few examples.

Lead dreidels such as this one were common in America into the 1940s. 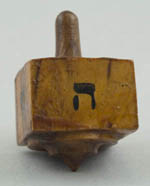 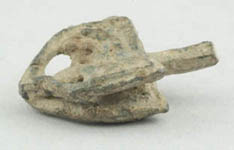 This example, also made of lead, is from Poland. Making dreidels helped some boys in Eastern Europe earn a few extra pennies. Though it could be a painful business, as the scars people still bear from accidental spills of the hot lead demonstrate. 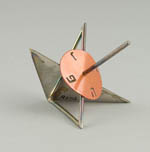 In the late 20th century, artists began to create dreidels in a more contemporary idiom, such as this one made by Ori Resheff around 1990. Like many dreidels produced in Israel, it bears the Hebrew letters
נ ג ה פ . 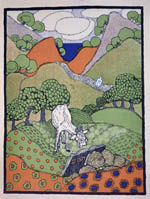 This magnificently illustrated Hanukkah storybook for children was published in Frankfurt around 1922. It tells the story of a dreidel that spins in a Matisse-like interior and meets a Bible-studying goat in the countryside. The illustrations are probably by Yaakov Epter. 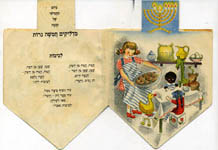 Hag ha-Or (Tel Aviv, ca. 1950) by Levin Kipnis, illustrated by Iza Hershkowitz, contains eight poems, one for each night of Hanukkah. This dreidel shaped book is decorated with delightful illustrations of children celebrating the festival. At the top of each illustration is a lit Hanukkah lamp, with an additional candle shown burning on each successive page.

Happy Hanukkah to all!