Arthur Szyk's 1948 drawing, Baruch Dayan Emeth, is inscribed with a quotation from Thomas Jefferson: "The Tree of Liberty must be refreshed from time to time by the blood of patriots and tyrants. [It is it's natural manure.]" This quote is from a letter Thomas Jefferson wrote to William Stephens Smith, Paris, 13 November, 1787. 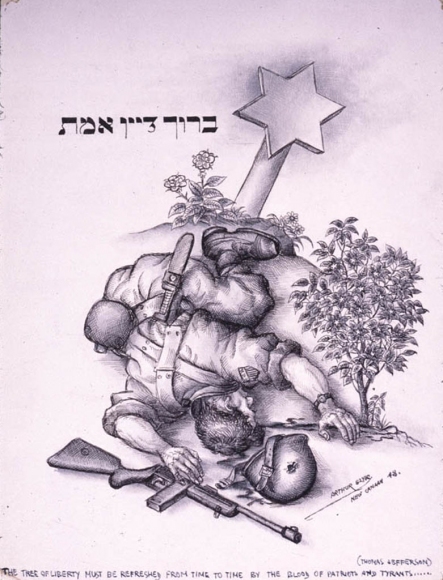 Arthur Szyk (1894-1951) was born in Lodz, Poland. He spent a brief period in Paris after World War I, and was in England at the beginning of World War II. By 1940 Szyk resided in New Canaan, Connecticut. A talented calligrapher and painter, his most famous works are a Haggadah, produced during the early 1930's and published in 1940, and his decorative Declaration of Independence for the State of Israel. His works encompasses designs for stained glass windows for synagogues, among which are those in The Temple in Cleveland, and illustrations for non-Jewish books, including the fairy tales of Grimm and Anderson.

During the Arab - Jewish conflict following the U.N. General Assembly decision on the partition of Israel (adopted on November 29, 1947), Szyk produced political cartoons such as this one dealing with the struggle for the survival of Israel which were published in newspapers and magazines.