This poster honoring Pauline Dolinsky is dated December 26, 1918, just over two decades after the founding of the Rabbi Isaac Elchanan Theological Seminary (RIETS). Its highly stylized text contains a resolution passed jointly by the Women's Branch of Yeshivat Rabbi Yizchak Elchonan [sic] and the Ladies' Kohl [sic] Aid Society to honor the hard work of their shared president, Pauline Dolinsky. 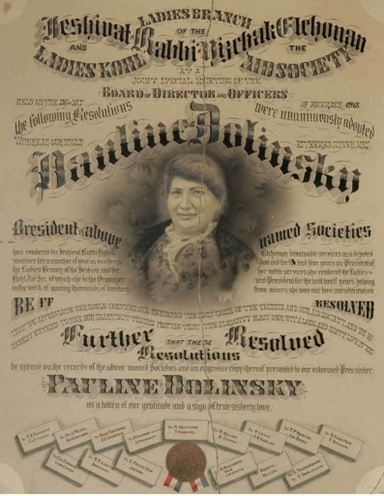 Pauline (Peshe Elke) was born in 1863, in the Pale of Settlement, to Joseph and Sarah Breger. She immigrated to New York in 1881 at the age of 18 and probably worked in the sewing industry for about four years. In 1885, Pauline married Hyman Dolinsky, a textile merchant who hailed from Vasilishok (Vasilishki), a small town between Grodno and Lida.

The Dolinsky family's wealth slowly grew over the next two decades. By 1900, the family had a live-in maid in their apartment on Broome Street. At around this time, the family began to support their synagogue, Adath Israel of New York, as well as the fledgling RIETS. Pauline became active in community service in 1910 after her children had become old enough not to need her.

List of Dolinksy family members from the 1910 US Federal Census: Parents
Hyman and Pauline, Hyman's mother Sarah, and the Dolinsky's five children
Bernard, Freda, Esther, Joseph, and David. Their first child, Hirsch, passed
away as an infant in 1887. The census page also makes note of the family's
servant, Fannie Lacks.
National Archives record, accessed on Ancestry.com on 9/22/2022

In 1910, Pauline Dolinsky worked to start two schools and one charity: the Hebrew Day Nursery of Montgomery Street, also known as the Gan Yelodim; the Tifereth Jerusalem Talmud Torah, which would grow to become the Mesivta Tifereth Jerusalem in the 1930s; and the Ladies' Coal Aid Society, whose goal was to provide coal to poor families in New York to heat their homes over the winter. Pauline also became the vice president of the Ladies' Branch of RIETS in 1910, and was appointed president in 1914.

The Ladies' Branch functioned both as a fundraising arm of the yeshiva and the department in charge of arranging for the room, board, and laundry of the students of RIETS. Pauline Dolinsky was credited with serving the food for a Simchat Beit Hashoeivah held by some of the students of RIETS during Sukkot of 1917. Women like Pauline Dolinsky, who acted in service of the Yeshiva, were relegated to gendered roles.

Hyman Dolinsky passed away suddenly in 1916. Pauline continued to work for the institutions that she helped to create, while also taking on some of the responsibilities of her deceased husband. She took over his business as a proprietor for the Hydol Plush Manufacturing Company and continued to sustain the schools and charities they had both supported.

The exact impetus for the 1918 joint resolution of the Ladies' Branch of RIETS and the Ladies' Coal Aid Society is not identified in this poster. However, this poster still provides a small but profound glimpse into the workings of the early days of RIETS from an interesting source.

Yitzhak Graff ('24YC) is a Student Assistant at YUM. Originally from the Greater Washington, D.C. area, he is currently studying history at Yeshiva College. When he's not trying to pass his classes, he researches and writes about the Jewish history of Washington, D.C. and the history of the students of YU.