Jewish Soldiers in the Civil War: Discoveries from the Shapell Roster – Live Event & Livestreamed on Zoom

In partnership with the Shapell Manuscript Foundation, please join us for the launch of two new and exciting projects on the Jewish American experience in the American Civil War. This in-person event will begin with a virtual tour of the Shapell Roster of Jewish Service in the American Civil War, an ongoing reappraisal of the military service of Jews who served in the Union and Confederate Armies and Navies from 1861 – 1865. This introduction will be guided by Adrienne DeArmas (Director, Shapell Roster) and Professor Jonathan Sarna (Lincoln and the Jews: A History, co-authored with Benjamin Shapell). Meticulously compiled since 2009, the Shapell Roster is a publicly accessible digital history resource granting access to thousands of men who served.
To showcase the wealth of resources that the Roster makes available, the evening will also feature the launch of a new book, Jewish Soldiers in the Civil War: The Union Army, authored by Professor Adam D. Mendelsohn, who was given early access to the Roster for his research. Dr. Mendelsohn will give a talk in conversation with Professor Deborah Dash Moore (University of Michigan), current Editor-in-Chief of the Posen Library of Jewish Culture and Civilization, and author of GI Jews: How World War II Changed a Generation.

The event will conclude with a reception and book signing by Dr. Mendelsohn.

Purchase of advance tickets will include an option for a discounted copy of Jewish Soldiers in the Civil War: The Union Army. 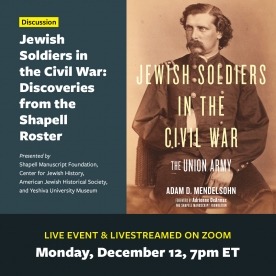