Created in 1769, this plate from the Museum’s Max Stern Collection of Judaica, is inscribed in Hebrew 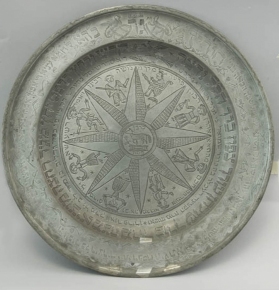 with the order of the Passover Seder, and in Yiddish with the name of the owner. Narrative motifs, inscribed within a star form, include depictions of Moses and Pharaoh, three of the four sons of the Haggadah, and the figures of Miriam and Aaron. In the center is a depiction of the paschal lamb standing on an altar of burnt offerings. This plate is made of pewter, an alloy composed of tin and zinc, with trace elements of copper or antimony. Pewter was more affordable than silver, and was frequently used as tableware from the Middle Ages into the 19th century. This plate is currently on view in our exhibition Shabbat – Inside and Out. 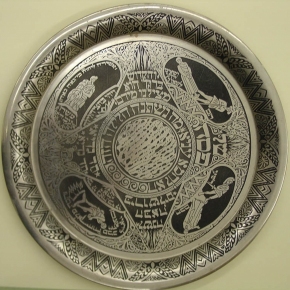 Over 150 years later – and 12 years after stainless steel was first patented for weaponry in Germany (in 1912) – this plate by Haim ben-David Schwed recalls traditional pewter Seder plates, although the artistic style is modern. It, too, is inscribed with a star motif, and some of the same figures from the Passover story, but on this plate a depiction of matzoh is the central element. 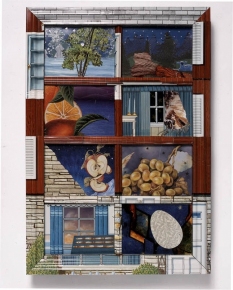 motifs, but that’s where the similarities may end. For the Child is made from pre-printed steel from doll houses, recycled tin containers, and other materials to create a panoramic evocation of contemporary life. This plate has eight “windows,” each containing a reference to the Seder service; the orange seems to be a modern addition to the Seder plate and Passover tradition.

The Museum has a rich collection of Passover Seder plates. Want to have a look at them and our collection of other Passover-related objects? You can start here.