Lillian Freehof’s 1954 book, The Carrot Candle, tells the story of a rabbit that thinks a bunch of orange Hanukkah candles are carrots. Orange Hanukkah candles were produced into the 1950s; and a box in our collection made by Socony-Vacuum Oil Company is a reminder of that tradition. The company became Socony Mobil Oil Company in 1955, so the candles must have been made before that date. By the late 1950s, however, boxed Hanukkah candles were produced in now-familiar pink, blue, yellow and white tones. Many children reading Freehof’s book in the late 50s and early 60s, when multi-colored candles became common, must have wondered how that rabbit could have mistaken candles for carrots! 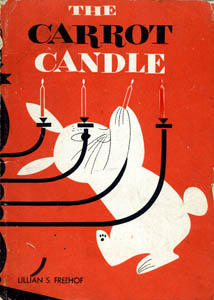 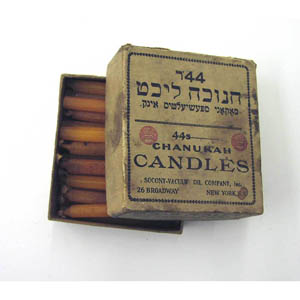 Although branched Hanukkah lamps were often shaped like trees, a 1968 lamp in our collection specifically calls to mind the Christmas tree and its Jewish cousin, the Hanukkah bush. As early as 1879, Henrietta Szold mentions that some Jewish families had a Hanukkah bush in their home. For some people, the rationale was that Christmas had ostensibly become a “secular” American holiday. Others “koshered” the tree by decorating it with Jewish symbols and topping it with a six-pointed star. The Art of Celebration, an exhibition we opened in 1985 recreated rooms from Jewish homes decorated for the holidays. On display and the focus of the Hanukkah room was a six-foot tall, lighted, spinning dreidel at the base of which were toys, an opened present, and a bag of Hanukkah gelt. These details together with the prominence and central placement of the dreidel in the room offered perhaps a more “kosher” variant of the Hanukkah bush. 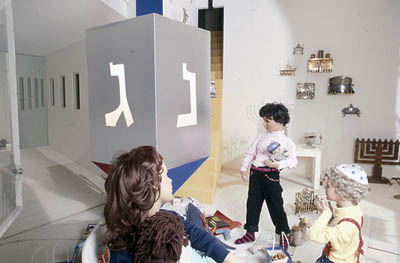 Hanukkah Room from The Art of Celebration, Yeshiva University Museum, 1965 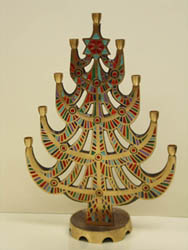 In 2014, Yeshiva University Museum acquired a Hanukkah lamp that speaks to the history of the Museum and its connections to Yeshiva University. Samuel Belkin (1911-1976), the second President of the University, who served from 1943-1976, felt strongly that the University should follow the model of Brown and Harvard, and have a museum of its own. He inspired Erica and Ludwig Jesselson to share his vision, and to endow the Yeshiva University Museum, which opened to the public on the University’s main campus in Washington Heights in 1973. Dr. Belkin’s widow, Abby Frosberg Belkin, left the Museum an elaborate silver Hanukkah lamp inscribed "Presented to Dr. Samuel Belkin on the occasion of his 50th birthday by the Alumni of Yeshiva University.” The form of this lamp resembles a Torah Ark flanked by columns, topped by rampant lions supporting a crown. It’s an object that reflects his remarkable legacy – and the Jewish values he conveyed through the University and its Museum! 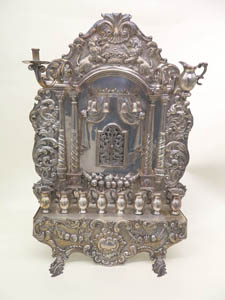