Over the next few weeks, many of us will pick up the phone to call family and friends to wish them a Shana Tova, a Happy New Year. We might also take advantage of the social media options available to us, or choose from the ever-growing number of websites allowing us to send customized e-cards. About a century ago, however, the medium used to connect loved ones and share New Year’s wishes across short and vast distances was the postcard, or “postal card”, as it was originally called.

The custom of sending written greetings for the New Year dates to 14th-century Germany when Rabbi Jacob, son of Moses Moellin, known as the Maharil (1360–1427), suggested that people begin any correspondence in the month of Elul with the words "May you be inscribed and sealed for a good year." From the late 1800s through the early 1900s, color postcards printed in Germany and Eastern Europe were widely available. Though many depicted scenes of religious practice or Jewish history, others used more subtle images and conveyed personal messages through sentimental Yiddish verses.

Museum educators like to ask, “What’s going on in this picture?” The postcards below were produced in Germany in the early 1900s and are now part of the Yeshiva University Museum collection. In the first, a well-dressed man on the right side leans forward, elbow on raised knee, as he speaks into a 1920s German telephone. The woman on the left sits in a slightly altered mirror image of the same pose. In between them, making or representing their separation, is a grand house on verdant grounds. Can we identify the location by its architecture, or is it intentionally generic? Is there anything in the card’s images that suggests Rosh Hashanah? It does not seem so. Perhaps that is why the phrase Shana Tova appears four times in Hebrew (can you find them?) and once in English. But the real heartfelt message is conveyed in the four-line Yiddish verse at left: “I wish you strength and vigor/ To love me with truth and ardor/ May not a single cloud/ Darken your sky.” 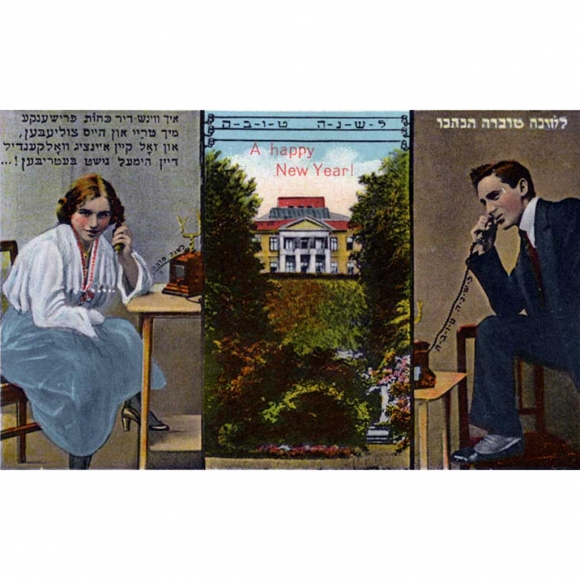 In this next postcard a man and woman on the right are listening to a voice through headphones on a crystal radio set. The man on the left appears to be speaking to his beloved tateh and mameh. The figures are again separated, here by a city scene that suggests a specific place at the heart of Rosh Hashanah prayers. 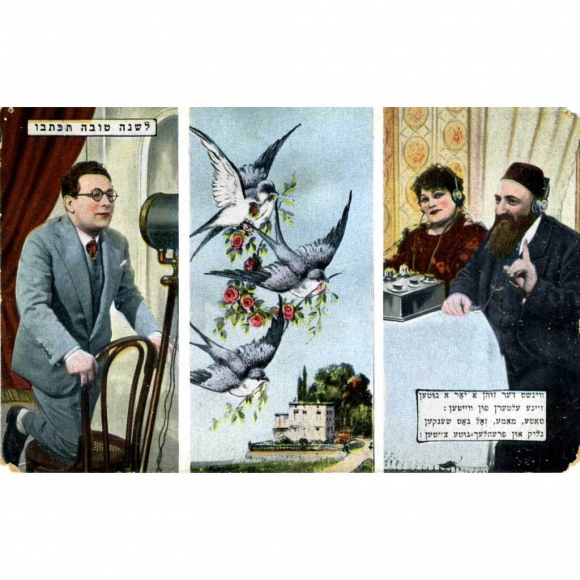 Two postcards depicting different relationships, but featuring similar designs and seasonal wishes. It’s also interesting that while the cards highlight the use of the era’s advanced technology, they and the New Year’s messages they hold were actually delivered by the local mail carrier!

May we all be inscribed for a year of peace, good health, and happiness.