Scottish-born David Roberts began his career as a stage painter and designer of scenery. Largely self-taught, he eventually made his reputation through the detailed lithograph prints that were produced after his sketches and paintings of sites across Europe and the Middle East. In 1838, after his election to the Royal Academy in London, he embarked on a trip to Egypt and the Holy Land. His visit inspired a painting of The Destruction of Jerusalem, which caused a sensation when it was exhibited at the Royal Academy in 1849. The popularity of the painting prompted Roberts to produce a print based on it, of which few copies survive. Roberts anachronistically dates the scene to September of 71 CE, a year after the historical siege of Jerusalem, and takes certain theatrical liberties with events and topography. The image represents the Romans, under the command of Emperor Titus, having just destroyed the wall of the outer city, about to attack Mount Zion and the Temple. This view from the north side of the Mount of Olives shows the Temple with its various courts. Adjacent to the Temple is Herod’s Palace, site of the ancient Temple of Solomon and its numerous public buildings. In the foreground are represented Roman soldiers and their captives. This post anticipates Tisha b'Av, the ninth day of the Hebrew month of Av, which this year begins at sunset on Saturday, July 25, 2015, and continues until the evening of Sunday, July 26. A day of communal mourning, Tisha b’Av commemorates the anniversary of the destructions of both the First and Second Temples in Jerusalem. 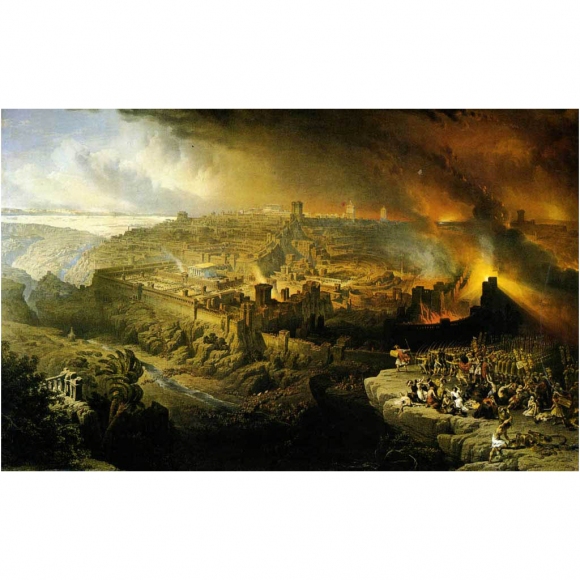